The Three Pillars of Amazon EBITDA 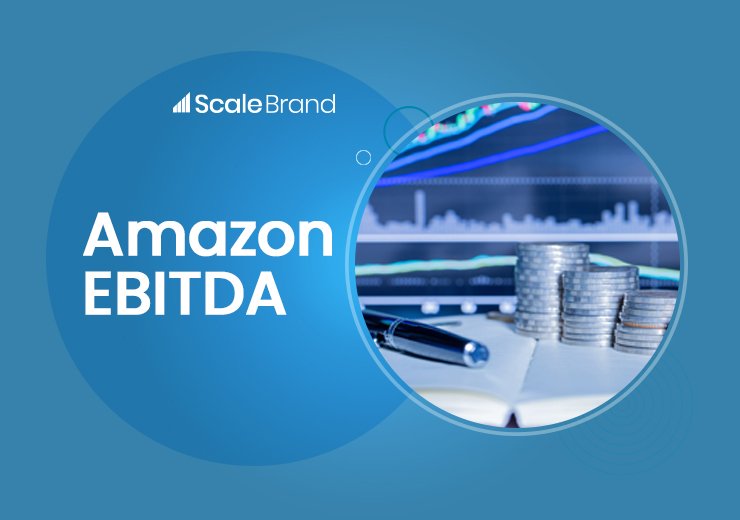 Amazon has become unstoppable in terms of growth around the world. The company had reported a high revenue of 21.33 billion US dollars even during the pandemic. It had over 11.6 billion US dollars income generated from this revenue. In the same discal period of 2020, the revenue reached 368 billion US dollars as per the data of Statista. Along with this, the Amazon EBITDA has also increased significantly over the past few years. EBITDA is defined as the earnings before interest, tax, depreciation, and amortization. This figure is not discussed widely, but it holds vast importance for the brands as it determines the company’s actual profit every year.

The growth of EBITDA for Amazon has been regular in 2021 as per the data by Trading Economics. In 2021, Macotrends reported that the Amazon EBITDA was $13.8 billion in the third fiscal quarter. It was also found that Amazon annual EBITDA had increased over 8.52% compared with the previous year.

Other statistics reveal that Amazon’s EBITDA for 12 months in 2021 was $60.404 billion, a 38.2% increase from the previous year. Compared to earlier, the Amazon EBITDA increased 32.54%, 30.86%, and 78.13% in 2019, 2018, and 2017. It shows that the company’s statistics of Amazon EBITDA are being improved every year, which is interesting to note. While comparing the EBITDA of Amazon with other companies, it can be seen that it currently has the highest EBITDA, which is also greater than tech giants like Facebook, Apple, Microsoft, and Alphabet. It shows that Amazon will become the market leader with high growth in the market that it will not beat. 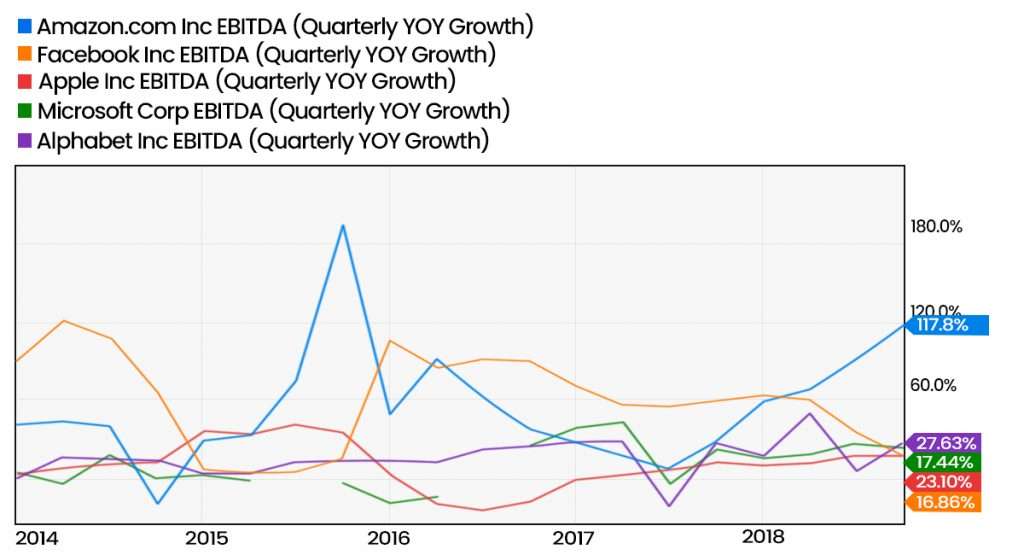 While the company has interesting statistics related to its EBITDA growth, it is important to identify the factors that have led to Amazon’s EBITDA growth over the past few years. The three pillars of the Amazon EBITDA growth have been discussed below.

Minimizing the company’s cost is one of the prime reasons for the company’s success in terms of gaining high profitability. It is certainly one of the major reasons for its high EBITDA. It means that Amazon’s high EBITDA has something to do with its reduced operating costs along the fiscal year, which needs to be analyzed in the present discussion. The company’s cost structure includes various costs across the business model such as customer service center, IT structure, maintenance, software development, marketing, inventory management, information security, physical space cost, delivery services, and much more.

According to Forbes, the sales trajectory of Amazon is expected to grow with the increase of the company’s control along the supply chain. It results from the company’s hold on the supply chain, which also helped reduce its cost structures. It can also be why the company also masters its last-mile delivery before the package reaches the customer’s doorstep. Amazon has even bought 11 Boeing 767 passenger jets converted into cargo planes that will bring a total fleet of 85. It will also attempt to reduce the fleet cost of Amazon by owning or leasing more cargo planes.

The company has also made partnerships with FedEx, UPS, and USPS. This long-term partnership has benefited the company in the cost-saving aspects as well. Amazon has been developing such a type of network, which helps reduce the cost and enhance a fast-moving network.

It is one secret of high EBITDA for the eCommerce giant, Amazon. In addition to the supply chain, the company also reduces the costs related to advertising and marketing. It is also important to note that the artificial sales growth via Amazon is slowing these days. The statistics also reveal that Amazon’s marketing price is high for its sellers, which constitutes over 30% of a product’s price. It means that owning the marketing segment in its business helps generate revenue. Still, it also helps reduce the cost as the company does not have to take additional services that can incur high charges.

Amazon is launching a new program that will help control third-party costs. It will let the company control the prices of third-party products in exchange for the minimum payout to the sellers. Such innovative ideas have helped the company bring cost-efficiency in its business, reducing its operating expenses and increasing the company revenue for the long run. The company’s total operating cost is decreasing, but the net sales increase, resulting in high EBITDA. 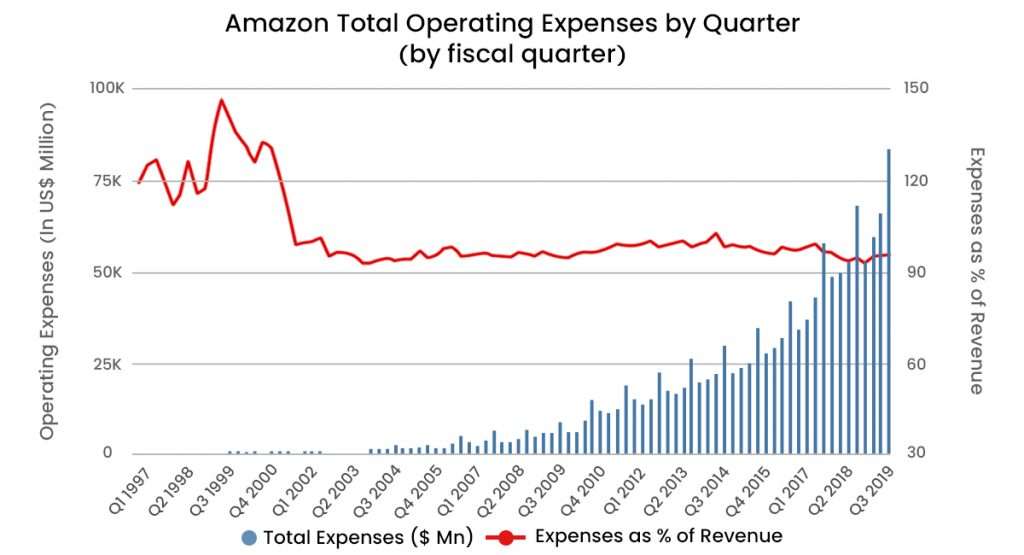 As per the data by Dazeinfo, the total expenses as a percentage of revenue are decreasing for the company. Therefore, one can indicate that cost efficiency is one reason for Amazon’s high success rate in the market. It is also one of the major reasons for the high Amazon EBITDA.

The EBITDA can also be high if the sales increase drastically at the same costs as the company. It is also the case for Amazon, in which the cost of the company is not facing high growth compared to the revenue, which is increasing largely. It can be analyzed that the revenue has also been increasing significantly along with the Amazon EBITDA. The revenues have increased to the limit where further growth is difficult to imagine. Still, Facebook has bypassed the company in terms of revenue growth. Amazon is still among the market leaders with revenue that is difficult to beat among the tech companies.

Amazon had started as a direct e-commerce seller years ago, but the business has still proved to be the biggest source of revenue. In 2020, the retail eCommerce sales worldwide were worth 4.28 trillion US dollars which are projected to reach 5.4 trillion US dollars in 2022.

However, the company shifted its focus towards the third-party selling platform. As a third-party company, the company can gain large profits has proved to be a successful business that appears in the Fortune 500 businesses. It can be because the company is providing the services like fulfillment so that the vendor can become able to sell on the platform of Amazon.

The company’s major source of revenue is by charging the commission on the sales generated by these vendors. It helps Amazon not only to reduce the cost but also to generate more revenue. In 1999, this initiative of Amazon had gained more popularity as compared to its direct eCommerce platform. The statistics reveal 55% of the units had been sold on Amazon via third-party sellers in the first-quarter sales.

It is safe to say that the unique business offering of Amazon has allowed the company to have high traffic, customer base, sales, and revenue which has enabled it to face high growth. The company has no real direct competitor due to its unique business model. Still, the competitors like Etsy, Walmart, and other competitors are trying to gain a market position similar to Amazon in the region of the USA. The company does pay a cost as high as $45.4 billion on activities like logistics and shipment centers.

Still, it only enhances its attractiveness as a third-party seller and brings more vendors and customers to the platform to increase sales. It means that the company’s profits outweigh the cost larger than the other competitors due to the smart capital expenditure strategies that the company deploys.

With this discussion, it can be argued that the company’s sales and revenue are increasing at a larger pace than its costs, resulting in high EBITDA.

It can be said that the growth of EBITDA also depends on the company’s acquisitions. The company needs to add various products that will help the brand grow. For that purpose, it becomes more important for a brand like Amazon to choose the right product and avoid any risky investments that can result in the high cost after losses incurred due to that brand acquisition.

For a successful acquisition for brand expansion, it is also important to outbid the competitors and generate the plan, which will help get the payback quickly. Amazon tends to acquire fast-growing brands and is building stability in the market. The company has quick decision-making in terms of product acquisition, allowing it to grow quickly.

While acquiring successful brands, the company also has to put less effort and waste less time building the brand. The post-acquisition management practices in which the strategy, structure, people, and systems are aligned in two companies have to go through a less time-consuming process.

In this way, Amazon incurs less cost while acquiring the brand, and instead, the company develops the new revenue streams by adding new brands to its portfolio. The company’s major objective is to make Amazon the kind of brand that maximizes its service offering and becomes more diversified to differentiate itself from its competitors in the market.

In conclusion, it is possible to say that the company has reached the stage where it is controlling its costs, generating high sales and revenue, and adding new brands to its portfolio. It is helping the business to increase its EBITDA and make it unstoppable in terms of success in the competitive market. It is done so by the company’s innovativeness and strategic planning, which has enabled it to make smart decisions of minimizing expenses and raising more funds for the company. The first pillar of attaining the high EBITDA is the company’s efficient cost structure, which has allowed it to minimize its expenses. The reduced costs can increase profit margins compared to other factors considered important to increase the EBITDA. The second pillar is the company’s high sales and growth, which has gone beyond expectations. The company increased its sales over the past few years while sustaining its costs. A number of brands are being added to Amazon every month, which allows the business to expand more quickly. The highly profitable business model is another key to the company’s success in the competitive market. Lastly, the third pillar is the unique and innovative business model of Amazon EBITDA. This model allows the company to make quick mergers and acquisitions with the new brands that gain high recognition in the market. Amazon has been making smart choices in which they do not always have to make much effort in extracting revenue from these acquisitions.

Search posts
Categories
Recent posts
How we can help you?